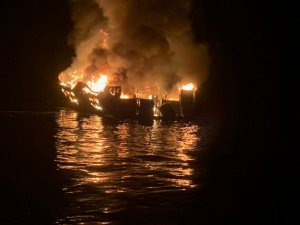 Federal authorities are conducting a criminal investigation into the fire on a California dive boat that killed 34 people in one of the state’s worst maritime disasters, a law enforcement source said on Monday.

Federal authorities are conducting a criminal investigation into the fire on a California dive boat that killed 34 people in one of the state’s worst maritime disasters, a law enforcement source said on Monday.

That investigation is proceeding as divers postponed for another day efforts to raise the 75-foot Conception from the ocean floor, citing weather conditions. They hope to find the remains of the final victim inside the charred wreckage of the ship.

“We are conducting a joint investigation. No criminal charges have been filed at this time,” the source told Reuters .Agents from the FBI, Bureau of Alcohol, Tobacco and Firearms, the U.S. Coast Guard and local sheriff’s deputies served search warrants at the offices of the boat’s owner and two other ships belonging to the company.

The Conception, owned by California-based Truth Aquatics, erupted in flames at about 3:15 a.m. on Sept. 2, killing 33 passengers and a crew member sleeping below decks as it sank off Santa Cruz Island.

The five surviving crew members were above deck when the fire erupted and have told investigators that the intense flames made it impossible to enter the sleeping quarters. The victims are believed to have died of smoke inhalation.

Law enforcement officials declined to say what they were seeking during those searches. One of the other ships, the Vision, is said to closely resemble the Conception.

The Los Angeles Times reported that the investigation was focused on possible safety lapses aboard the Conception, including the lack of a night watchman and failure to properly train the crew for such emergencies.

Crew members have told investigators they did not hear smoke alarms before awakening to discover flames erupting from below decks, National Transportation Safety Board member Jennifer Homendy has said.

Coroner’s investigators have used DNA tests to identify the 33 badly burned bodies recovered so far, forgoing formal autopsies in order to speed the return of the remains to families, some of whom traveled from as far away as India following the Labor Day tragedy.

One victim’s mother was notified in Japan and another family was found in Singapore.

Truth Aquatics filed a petition in federal court in Los Angeles last week seeking to avoid liability by invoking a 19th-century law that has been used in such disasters as the 1912 sinking of the Titanic.

This news is a total 171 time has been read