Crisis begins to bite in Turkey 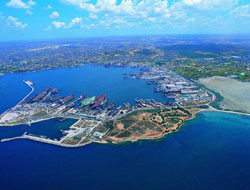 Turkey?s shipbuilding industry has been experiencing a serious decline in production over the last four months.

Turkey"s shipbuilding industry has been experiencing a serious decline in production over the last four months.

Turkey"s shipbuilding industry has been experiencing a serious decline in production over the last four months. Erkan Selah, a leading figure of the industry, says the "shipyards crisis" is due to the controversy over fatal workplace accidents in Tuzla and not the global crisis. As the global financial crisis begins to bite in Turkey, many industries have complained of its destructive effects. But for the shipbuilding industry, the crisis began much earlier and due to a very different reason, according to a top industry representative.

The crisis of Turkish shipbuilding began with ?the incidents in Tuzla shipyards,? Erkan Selah, vice chairman of the Turkish Shipbuilders Association, or G?SB?R, told last week.

Tuzla shipyards have come under fire, after a total of 62 workers have died in work related accidents since 2000. The rate of fatal accidents increased during 2008, as five workers died in February, two in March, three in May and two in July. Selah, who is also the board chairperson of Selah Shipyards, drew harsh criticism in May, after he claimed the outlawed Kurdistan Workers" Party, or PKK, was responsible for the deaths.

?The sector is highly dependent on the global financial system,? he told the Daily News. ?There is an average nine percent decline in production since the last four months. That is how the credit crunch is directly hitting the industry.?

Companies in the shipyards employ a total of 28,500, according to a study by Mazlum-Der, a human rights organization. As the crisis bit, 7,000 were laid off, according to media reports. But Selah said layoffs were ?the last resort.?

?We did not layoff any workers,? he said. ?Some white-collar employees were affected, but we are determined not to lose our staff directly involved in production.?
Requesting a ?support package? from the government, Selah said input costs were too high, while banks were not confident enough in the industry.

Speaking about the fatal accidents at Tuzla's shipyards, Selah blamed the media as ?being responsible for increasing the effects of the negative impact.?

?The press have just been exaggerating incidents,? he said. ?They took sides with their stories.?

Blaming ?hot weather? on the rising number of accidents last summer, Selah continued: ?No one likes accidents. But this is a heavy industry and such incidents occur all over the global shipbuilding industry.?

Selah Shipyards were shut down for six days in May, after two deaths in eight days. The incidents seem to have led Selah to consider a ?conspiracy? against Turkish shipbuilding. ?The press were waiting for something like an accident to happen and to write a story about it,? he claimed. ?They said workers who went to the pharmacist to meet their basic needs were injured.?

Referring to demonstrations against workplace deaths, he said the public ?does not truly know which side the workers stand on.?

?Limter-?? was able to bring a few people for demonstrations and they did not consist of workers only. They were mainly students.

?The press provoked people over accidents and deaths,? Selah said. ?They targeted employers as the only ones responsible for the incidents.?

Turkey has the world's fastest growth rate in shipbuilding. Exports in the sector reached $2 billion in 2007, up from $1.4 billion the year before.

Cem Dinç, head of Limter-??, accused employers at Tuzla of being responsible for the horrible deaths. ?The law is not properly being implemented in Tuzla and the accidents occur because of that,? he said. ?Some 114 workers died in workplace accidents since 1992. And the reason is lack of safety for the sake of maximum profit,? he added.

?The government and employers are responsible for establishing a decent working medium,? he said. ?Working conditions are the only key for quality in production. We do not struggle only for conditions of the shipbuilding workers, we struggle for the workers of every sector,? Dinc said.

This news is a total 9047 time has been read