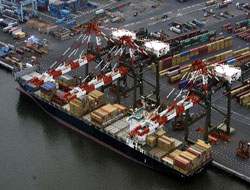 Crisis has hit Lagos ports again in the New Year as over 65 ships queue to discharge their consignments at ports.

Crisis has hit Lagos ports again in the New Year as over 65 ships queue to discharge their consignments at ports.

Crisis has hit Lagos ports again in the New Year as over 65 ships queue to discharge their consignments at ports. The 65 ships consist of both petroleum tanker vessels, containers, bulk cargoes and refrigerated ships with frozen fishes. Available data confirmed that most of the ships came into the country"s territorial waters in the last one week, added with those that have been delayed from discharging due to lack of berthing space.

Apart from the 65 ships waiting to discharge their consignments, BusinessDay learnt that more 83 ships will be coming into the country in the next two weeks.

Reacting to the development at a stakeholders meeting in Lagos, Tuesday, Ibrahim Bio, minister of transportation, said the rate of congestion at the port was alarming, stressing that if nothing was done urgently, Nigeria would certainly lose a larger chunk of its cargoes to neighbouring countries.

He, therefore, called on the stakeholders to work together to ensure that the port was decongested within two weeks to give way for the in-coming vessels and to avoid the international community imposing surcharges on Nigerian bound cargoes.

Bio pointed out that although the terminal operators have provided some infrastructure at the ports, he emphasised that it was not enough to make the needed impact at the nation seaports.

?We will not tolerate a situation where terminal operators deliberately delay goods at the ports by not providing enough equipment?, Bio stressed.

The minister frowned at the high charges which terminal operators impose on importers, saying that any port levy must be duly approved by the appropriate agencies, through the ministries.

This news is a total 1544 time has been read