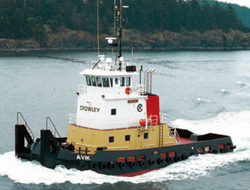 The first tug of similar type named the Avik was delivered to Crowley on June 2, 2004 by Dakota Creek Industries, Anacortes, Wash., and entered service soon after with much success. These two additional tugs will follow the design of their predecessor closely with delivery dates within the first quarter of 2009.

The tugs will handle barges transporting fuel and general cargo to communities in Alaska where shallow water and lack of docking facilities is common. In those cases, tugs and barges make a beach landing to load and unload cargo.

"We understand the Alaska market and its dependency on seasonal deliveries," said Craig Tornga, vice president, petroleum distribution, Alaska. "The first Avik-class vessel has proven its worth in this market and we are looking forward to deploying additional tugs of this type to serve our Western Alaska customers."

With the addition of these two new Avik-class tugs, Crowley says it will be able to more efficiently serve the Western Alaska communities.

One tug will work Bristol Bay and the lower Kuskokwim coast, and the other new tug will be deployed on the Yukon River.

These purpose-built tugs are designed for both shallow water and ocean towing operations and are the first step in the company's plan to modernize its Alaska river operations fleet.

Replacing two existing tugs (Kantishna and Twilite), the Avik-class tugs will feature a raised bridge for improved visibility, an electric Markey Single Drum tow winch for coastal towing and fendered push knees for river or beaching operations. They will be powered by three Caterpillar C18 diesel engines generating a total of 1,362 HP.

Each of the tugs has environmentally friendly features such as engines that meet IMO emissions requirements, on board holding tanks to retain treated sewage, electric deck machinery instead of hydraulic and fuel tanks surrounded by void spaces to minimize the chance of fuel spills.

Crowley's petroleum distribution group, which is headquartered in Anchorage, transports, stores, distributes and sells various bulk fuels and packaged petroleum products throughout the state Ð from the North Arctic Slope to South Central Alaska, coastal communities, and inland communities, including those along the Kuskokwim and Yukon rivers. The company also provides freight transportation via combination fuel and freight barges, and sells gasoline from retail stations. 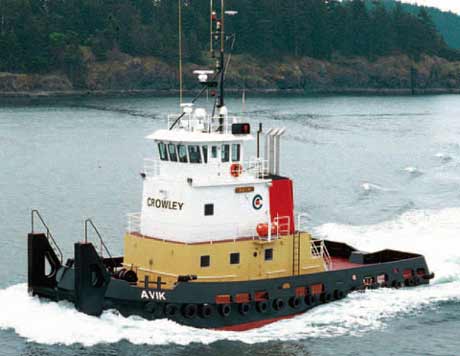 This news is a total 1849 time has been read