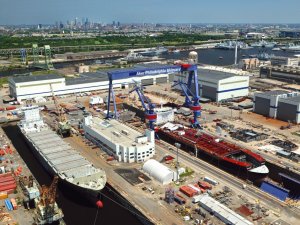 The 600-foot tanker has a carrying capacity of 14.5 million gallons of crude oil or refined products.

In line with the announcement made by AKPS on September 22, 2015, at delivery of the Ohio, APSI sold its interest in the APSI-Crowley joint venture with respect to that vessel to a subsidiary of Marathon Petroleum Corporation (MPC).

The delivery is considered to be momentous not only for Crowley, but also for the industry because it signifies the first time a product tanker has been constructed with consideration for the future use of LNG for propulsion.

The remaining three product tankers being built by APSI for Crowley are currently under construction and have planned deliveries through 2016.

“We are excited to offer our customers cutting-edge technology available in these new tankers, which not only embraces operational excellence and top safety, but also offers the potential to be powered by environmentally friendly LNG in the future,” said Crowley’s Rob Grune, senior vice president and general manager, petroleum and chemical transportation.

APSI has also started construction of the first two of four additional 50,000 dwt tankers for a subsidiary of Kinder Morgan, Inc., which are planned to be delivered between November 2016 and November 2017.

The shipyard also has contracts for two 3,600 TEU containerships for Matson Navigation Company, Inc., which are planned to be delivered in 2018.