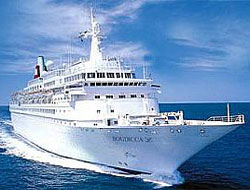 Fred Olsen reveals 2009 cruises from Scotland Greenock and Leith will see wealth of destinations by ship.

Fred Olsen reveals 2009 cruises from Scotland
Greenock and Leith will see wealth of destinations by ship.

Fred Olsen reveals 2009 cruises from Scotland
Greenock and Leith will see wealth of destinations by ship.

Fred. Olsen offers a choice of cruises from two Scottish ports in 2009 ? Black Prince cruises out of Greenock during May and June, while Boudicca is based in Leith from late June to early August. Both ships operate a programme of northerly cruises to Norway, Iceland, the Baltic and the North Cape, as well as cruising closer to home, around the UK and Ireland.

Black Prince's first departure from Greenock is a long cruise of 21 nights to the Adriatic, departing on 3rd May 2009. This cruise (BP0909) visits a wealth of attractive ports, starting with Ceuta in Spanish Morocco, then Cagliari in Sardinia followed by a cruise of the Aeolian Islands taking the ship to Durres in Albania. From here she visits the Croatian port of Split and on to Venice for an overnight stay. Ravenna follows, then the lovely old walled city of Dubrovnik, La Goulette for Tunis and Motril in Spain ? a good base for an excursion to the Moorish Alhambra Palace in Granada. Final port of call is Leixoes for Oporto, heart of Portugal"s port industry, before returning to Greenock. This cruise has a theme of Painting through Fred. Olsen"s ArtsClub programme of special interests on board, and the varied and historic ports visited will offer many opportunities for amateur painters to improve their skills. Prices start from £1,920 per person.

Boudicca begins her ex-Leith programme with a 13-night cruise to the North Cape departing 21st June 2009. This cruise (BD0914) heads north from Leith, making first landfall in Kristiansund to cruise Norway"s majestic Trollfjord, then cruises to the most northerly point ? Honningsvag for the North Cape, well inside the Arctic Circle and home of the Midnight Sun. From this stunning landmark, Boudicca cruises back down the coast of Norway, visiting Tromso, Leknes, Andalsnes and the pretty Art Nouveau town of Alesund. Final ports of call in Norway are Skjolden, an anchor port, and the bustling fishing port of Bergen, before returning to Leith. Prices for this cruise start from £1,551 per person.

Prices are per person, based on two sharing a twin cabin and include all meals and entertainment on board and port taxes.

This news is a total 7164 time has been read