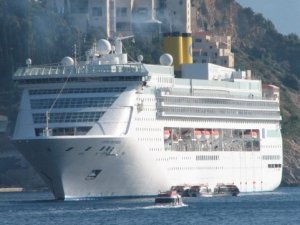 The cruise industry is beginning a downsizing the likes of which have never been seen in the modern cruise business.

While other segments of the shipping industry have experienced significant downturns prompting the wholesale scrapping of vessels, cruise shipping up until now has been on a continuous growth path.

Faced with no definitive timeline for a return to service and uncertainty over the rate at which travelers will return to cruising, the cruise lines are struggling to improve their liquidity and reduce their monthly cash burn. Carnival Cruise Line in its preliminary second quarter update reported that by extending maturities on its debt, reducing capital expenditures, employment, and operating costs, that it had lowered its monthly burn rate to $650 million from approximately $1 billion. Royal Caribbean Cruise Line is burning between $250 and $275 million a month.

Faced with the need to further lower expenses the cruise lines are now reportedly looking at their primary asset and expense, which are their ships. Carnival announced on June 18, that, “The company already has preliminary agreements for the disposal of 6 ships which are expected to leave the fleet in the next 90 days and is currently working toward additional agreements.”

In recent days the Italian media had been reporting that one of Carnival Corporation’s lines, Costa Cruises, had already sold its ship the Costa Victoria to become an accommodation ship at one of Italy’s shipyards. However, in a surprise announcement, the mayor of Piombino, Italy Francesco Ferrari, announced that the ship had arrived at the Tuscan port to be dismantled. Introduced in 1996, the 75,000 gross ton ship had been an active part of the Costa fleet up until cruise operations were suspended in March.

The surprise announcement that a relatively modern cruise ship would be scrapped is causing a stir among observers of the cruise industry and rampant speculation on which other cruise ships Carnival has agreed to sell. Historically, Carnival Corporation was following a measured growth strategy regarding overall capacity. They were selling approximately four ships a year basing the decisions on a ship’s overall revenue performance, requiring a double-digit return on invested capital, and guest satisfaction from the ship’s cruises.

As the largest cruise corporation, Carnival also had the most diverse fleet and some of the oldest cruise ships operating in major markets. The strategy had been to replace ships that were not generating the results with newer ships which inherently have the opportunity for greater revenue with additional cabin and balcony designs and generate a premium because they are new. However, none of Carnival’s ship sales in recent years had been to scrap yards and indeed very few modern cruise ships had gone to scrap at all.

It is unknown if any of the other large brands such as Royal Caribbean might be considering similar ship sales to reduce costs. However, reports are circulating that Pullmantur, the Spanish brand that announced that it had filed to reorganize under Spain’s insolvency laws, is currently stripping parts and material from the former Royal Caribbean ships the Monarch and Sovereign that it was operating. This has led to speculation that both ships might be being prepared for sale or scrapping.

The U.K.-based Marella Cruises, part of the TUI Group, announced after the suspension that it would be retiring its cruise ship the Marella Celebration. Built in 1984, the 33,000 gross ton cruise ship was the oldest and smallest in the Marella fleet, which has been expanded with ships from Royal Caribbean and Celebrity Cruises. Previously they had said the ship would operate for up to four more years before being retired. Marella had sold her sister ship for scrap leading to speculation that the Marella Celebration will soon depart for the scrap yards in Asia.

One of the challenges for the cruise lines will be to find buyers looking for cruise ships. Brokers have said that some Chinese firms are possibly in the market for cruise ships but most of the second-tier cruise lines that acquired older tonnage are facing similar financial pressures and lack the depth of financial resources to be active with acquisitions. Cruise and Maritime Voyages, which had been actively acquiring cruise ships from Carnival Corporation, confirmed that it is seeking to refinance after media reports that a loan package had collapsed. CMV contracted earlier this year to buy two cruise ships from Carnival’s P&O Cruises in Australia due for delivery in 2021.

Many of the smaller cruise lines that were the traditional buyers for older ships went out of business as the cruise industry grew and consolidated. This may mean that the cruise industry can only turn to the scrappers. A glut of cruise ships could drive down prices in the scrap market and they are more time consuming for the scrappers because of all the outfitting that need to be stripped as well as a structure that often has less prime metals.

The only comparison that can be made to the current situation in the cruise industry is the mid-1970s when the oil crisis combined with the decline in long distance ocean travel collapsed the passenger business. Then ships that were just a decade old were sent to the scrap yards and fleets like P&O and Union-Castle Line quickly disappeared. P&O sold six of its 10 passenger ships for scrap.

Observers will continue to speculate about the depth of the coming cruise sales wondring if it will rival the death of the great ocean liners and which ships can survive.

This news is a total 1705 time has been read
Tags: Cruise Industry Downsizing Begins With First Sale of a Ship for Scrap