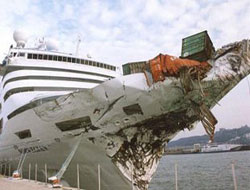 Latest on the Cruise Ship Collision in Greece

Greek news Web site Kathimerini has said that this collision was the fourth in the Aegean within a month -- the site reported that a number of Greek ferries have been involved in incidents where they have struck reefs, rocks or hit a moored vessel.

"Most ports do not have adequate piers and are not large enough to accommodate large cruise ships," Achilleas Tarlamis, the general secretary of the Masters and Mates' Union of the Greek Merchant Marine, told Kathimerini.

Meanwhile shipping trade publication Seatrade is reporting that Aegean Pearl, which is owned by Louis Cruise Line, was damaged at deck level, starboard side, and some lifeboats were also damaged. The ship was allowed to sail sans passengers to Syros' Neorion Shipyard to undergo repairs.

This news is a total 3638 time has been read