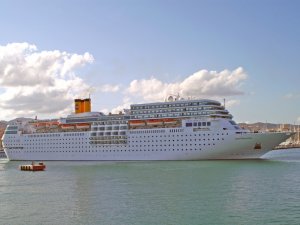 A heavy storm off Sardinia and a hull damage at the bow and a loss of an anchor on March 3, 2015, forced ‘Costa NeoRomantic’ to abort its cruise while it was enroute from Trapani to Marseille.

Earlier, it had already changed course due to winds of 11 Beaufort and was passing Sardinia on the east side instead of the west as planned. On its way, it had to tackle waves with a height of 6-7 meters and 60 knots wind force.

After the scheduled call at Marseille was cancelled due to the damage, the following stay in Savona starting on Mar 6 at 8 a.m. was extended for the necessary repairs. On Mar 7 at 8 p.m. the ship sailed again bound for Kalamata with an ETA of Mar 10. The lost anchor had to be replaced in the near future due to its safety relevance.

Costa stated that the safety of the passengers had never been endangered.

This news is a total 5287 time has been read