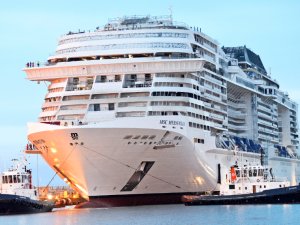 A cruise ship with over 4,500 passengers on board and over 1,600 crew members has been denied port access to Jamaica and Cayman Islands amid coronavirus precaution measures.

The ship has been identified as MSC Meraviglia, which is currently underway in the Caribbean Sea, Cayman Islands.

MSC Cruises is yet to provide World Maritime News with a statement on the matter.

The Jamaican Ministry of Health and Wellness said that the cruise ship was denied access to the port of call in Ocho Rios, St. Anne on the morning of February 25, 2020. As informed, upon inspection of port health officials, it was determined that a crew member had been put in isolation on board after reporting a fever, cough and associated muscle pains.

The crew member is said to have a travel history to a country with a confirmed coronavirus infection.

As such, the cruise ship passengers were prevented from disembarking the vessel.

The move was soon followed by a similar announcement from the Government of the Cayman Islands which was supposed to be the ship’s next stop.

The ministry said it was aware that Jamaica denied access to its port to the cruise ship.

“The Ministry of Health and the Public Health Department have reviewed the medical details of the person who has been isolated, and the details of one other member of the ship’s complement who is not well. Both appear to be in a stable condition,” the ministry said.

“In an abundance of caution, in order to provide protection to the health and safety of the residents of the Cayman Islands, the Government has denied permission for the cruise ship to call on Grand Cayman as previously scheduled,” Minister for Health Hon. Dwayne Seymour commented.

The cruise ship was scheduled to arrive in Grand Cayman today, February, 26.

Cruise ships have been at the center of media attention in relation to the outbreak of the virus, especially following the quarantine of Diamond Princess in Japan and that of Holland America Line’s ship Westerdam.

Cruise liners have resorted to numerous precaution measures in order to curb the potential threat as they resume operations.

MSC Cruises said in its latest release that it was tightening its coronavirus precautionary measures.

The company is conduct pre-boarding screening by thermal cameras to exclude persons who may be at risk, and passengers with signs or symptoms of illness such as fever (≥38 C°) or feverishness, chills, cough or difficulty breathing are denied embarkation.

MSC, like many other cruise operators, is denying boarding to anyone from high-risk areas like China, mainland China, Hong Kong or Macau and towns in central-northern Italy.

Furthermore, the cruise operator said it was carrying out elevated deep-sanitation on every ship in its fleet

This news is a total 5706 time has been read
Tags: coronavirus, Diamond Princess, MSC Meraviglia.