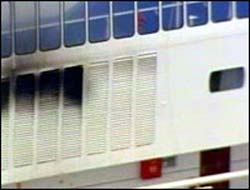 Poor fire training and a failure to carry out engine modifications have been highlighted in an accident report into a blaze on a cruise ship.

The Calypso was off the coast of Beachy Head, East Sussex, with 708 passengers and staff on board when the fire broke out on 6 May last year.

A failed low pressure fuel pipe flange on a starboard engine was the cause. It had not had "necessary modifications".

The ship had to be towed to Southampton but no-one was injured in the incident.

The Cypriot-registered Calypso, carrying mainly Dutch passengers, was en route from Tilbury, Essex, to St Peter Port, in Guernsey, when the engine fire was reported just after 0330 BST.

Coastguard helicopters flew firefighters and ambulance paramedics to the vessel, which was about 20 miles south-west of Beachy Head, while lifeboats and merchant ships also went to its aid.

A Marine Accident Investigation Branch (MAIB) report said there had been similar incidents of flange bolt failure "in the past and over 10 years previously".

It said frequent changes in the vessel's ownership could have been a reason why technical bulletins from the engine makers in 1995 and 1999 "were not effective in ensuring that the necessary modifications were carried out on The Calypso".

The response to the fire from those in charge of the ship was also highlighted in the MAIB report.

It said there were "flaws in the knowledge, experience and training of some of the senior officers", while their actions "did not appear to follow recognised good practice".

The fire only died down, mainly as a result of fuel starvation, due to the swift response of the watchkeeping engineer officer, the report concluded.

But it added that it was "to the credit of the master and the crew that nobody suffered anything more than discomfort".

The Calypso was operated by Louis Cruise Lines, whose Sea Diamond vessel sank off the Greek island of Santorini earlier this month. Two French passengers are missing, feared drowned.