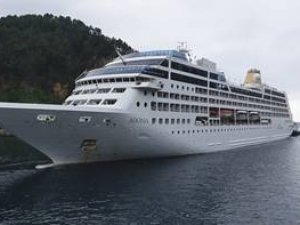 A cruise ship is sailing to Cuba from the U.S. for the first time in more than 50 years. The Bermuda-flagged Adonia sailed from the port of Miami carrying some 700 passengers on Sunday.

Cruise firm Carnival's  Adonia left Miami bound for Havana and will also visit the ports of Cienfuegos and Santiago de Cuba on the seven-day trip.

“To be a part of truly making history and preparing for an even more positive future for everyone is one of the greatest honors any company can have,” Carnival Corporation chief executive Arnold Donald said.

The cruise, which sails for Carnival's Fathom "impact travel" brand, comes after Cuba loosened its policy banning Cuban-born people from arriving to the country by sea, a rule that threatened to stop the cruises from happening.

According Carnival, the Adonia will cruise every other week from Miami to Cuba, with promises to engage passengers "in an ongoing cultural exchange program that gives you the opportunity to interact with the Cuban people."

The voyage is the first of what Carnival says will become weeklong cruises to Cuba twice a month, with the goal of promoting cultural exchange between the two countries following a warming of ties that began in December 2014 and culminated last year with the restoration of full diplomatic ties.

This news is a total 13303 time has been read
Tags: Cruise Ship Sails from US tor Cuba for First Time in 50 Years