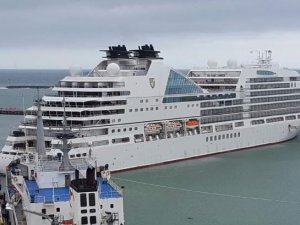 The accident happened in bad weather and under strong wind, which broke the aft moorings of the cruise liner and stern adrifted, colliding with the nearby berthed vessel and stucking at the pier. Fortunately, without causing injuries to the passengers on board. The accident was reported to the local authorities and Maritime New Zealand, which dispatched tug to assist the troubled liner. The vessel was towed and secured to the berth, but unable to leave Timaru as scheduled on Sunday evening, being detained by the Harbourmaster under his jurisdiction. The cruise liner suffered damages in the stern, as it came up against the number two wharf. Fortunately there are no breaches and reported water ingress.

“The incident occurred on Sunday at about 3.15pm when the southerly wind gusted up to 45 knots, causing the stern moorings to fail on the cruise ship”, said the PrimePort chief executive, Phil Melhopt.

The cement carrier Milburn Carrier II suffered more serious damages and breaches in the ballast tanks. Some compartments were flooded, but without causing danger for the seaworthiness of the cargo vessel. The ship also remains at the berth for repairs and safety inspection.

Milburn Carrier IIThe cement carrier Milburn Carrier II (IMO: 8606197) has overall length of 118.45 m, moulded beam of 16.70 m and maximum draft of 6.50 m. The deadweight of the ship is 8,465 DWT and the gross tonnage is 6,200 GRT. The cement carrier was built in 1987 by Hyundai Heavy Industries in their shipyard in Ulsan, South Korea. The vessel is operating under the flag of New Zealand and managed by local subsidiary of international cement conglomeration Holcim.

This news is a total 757 time has been read
Tags: Cruise ship Seabourn Encore collided with berthed cargo ship in New Zealand