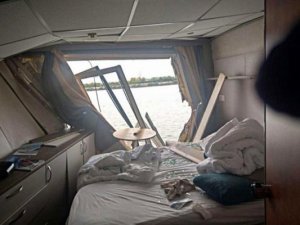 Cruise ship Prinzessin Isabella collided with a Panama-flagged cargo ship in Tulcea waters, Romania, the Danube on Saturday and incurred damage on its exterior.

The cruise ship had 165 passengers on board and it happened at 0500 LT on October 5.

The ship Prinzessin Isabella had more damage in the superstructure area. Many cabins of the passengers who booked cruise deals for the upper deck were crushed and torn open. Although two passengers suffered injuries they were not serious.

Some sources identified the general cargo ship as Blue Star I but no confirmation was available on the damages suffered by it. The Romanian police have started an investigation.

According to the latest news, Prinzessin Isabella was sailing from Vienna. The ship departed on Sep 29.

Per cruise news, the cargo ship Blue Star I was en route from Piraeus to Galati. The location of the collision, Danube river mile 43, lies between the port of Tulcea and the Odessa region’s Ishmael.

The cruise ship is now berthed at Tulcea and cargo ship has been brought to anchor from the collision site.

According to experts, it is ideal to spend an average of 7 percent of the entire travel fund to purchase cruise insurance. Buying it at the earliest will cover the cancellation benefits also.

Travel insurance is important because an issue that crops up midway can be a major hiccup.

Things can go wrong on a cruise trip and spoil many expectations. They can be missed connections, storms, engine failures or shipboard illnesses.

On a cruising trip, a lot of money gets invested and complete payment must be made before boarding. So, any medical issue at sea will be hugely expensive and advance protection is the right way to go.

Meanwhile, the demand for river cruising is rising phenomenally, especially in Europe. The Asian markets and market in the USA are growing cautiously.

Among the new exotic cruise destinations planned for expansion are the Caspian Sea, Amazon, African Lakes, China, Nile, and India.