Cruise ships give him a window to 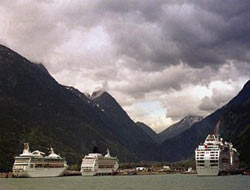 Cruise ships give him a window to world

Meeting Rick Spath is like catching up with an old friend. Five minutes after "hello" one finds oneself chatting as if he had been in and out of your life forever.

He has no pretenses, projecting an almost childlike openness to life and experience.

Yet, Rick, 50, has circumnavigated the globe nine times and has met thousands of people, many of them world-renowned celebrities, among them singers of the Big Band era, Helen O'Connell and the Andrews sisters, former Presidents Jimmy Carter and George Bush, authors, entertainers, etc. He is the cruise director of the Crystal Symphony, a luxury liner.

Heading up a staff of 60 people he is responsible for all of the events onboard -- entertainment, lectures, programs, etc. -- during the sailings. It is his job to see that the passengers have an enjoyable experience, and he relishes the opportunity to get to know many of them.

While a student at Springfield University in Springfield, Mass., he and a friend got a vacation job decorating the Queen Elizabeth II during Christmas. He was, he says, hooked from the beginning. When a cruise director offered him a job on the ship, his parents objected, insisting he finish college.

He was certain the opportunity would never come again. However, he has been sailing in various capacities on Cunard, Holland American, Disney and now, Crystal, for 28 years.

It is obvious he loves being a cruise director. His focus is always on the people, and the tales he tells center on the things he has learned by observing human nature. One incident involved a stowaway from Cambodia who apparently hid in one of the lifeboats in Taipei. He had to be kept on the ship until it docked at a Dutch port (since the ship was registered in Holland).

The captain befriended the stowaway, allowing him access to the bridge. At the captain's retirement party, this stowaway was in attendance, enjoying caviar and champagne. Later, when he was refused political asylum in the Netherlands, the captain contacted Queen Juliana, who overrode the court and allowed him to stay on in Amsterdam.

Early on, Rick sent a postcard home to his parents telling them he learned more in his first voyage than he had ever learned in college. He is delighted to extend that opportunity to his children. They recently spent 12 days cruising the Mediterranean with him during the summer.

One gets the feeling that Rick takes in travel the way a gourmand might savor an excellent meal. He enjoys going to new places, talking to the local tour guides, getting a taste of the different and exotic cultures. His favorite destination is the South Pacific, he says, "because it is so calm."

The one thing Rick Spath feels he really now knows, having seen so many different cultures, is that we, as Americans, need to acknowledge what our forefathers did when they founded this country.

While we, of course, have our problems here, he says we "should really appreciate what our country does for us." Rick met his wife, the former Patty Yavorsky, on board where she was running a commissary. He lives with her and their four children -- Steven, 11, Nicholas, 9, Michael, 5, and Ann-Marie, 6 -- in Weddington when he is not at sea. 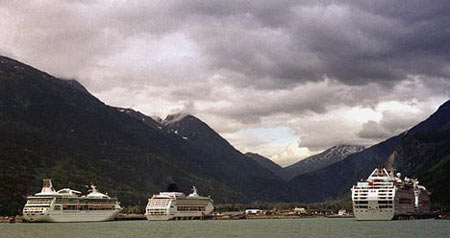