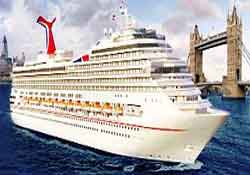 Despite American spelling, CARNIVAL SPLENDOR will debut in the UK

These 12-day Northern Europe voyages, which will operate July 13 - Aug. 30, 2008, will offer guests a diversity of shoreside experiences with visits to historic, centuries-old cities in Denmark, Germany, Finland, Russia, Estonia, and The Netherlands.

CARNIVAL SPLENDOR will be the second Carnival ship deployed in Europe next year, joining the Carnival Freedom, which will operate a program of 12-day Mediterranean cruises May-October 2008.

"Consumers are discovering that cruising is the best way to see Europe as it provides the opportunity to experience and explore multiple destinations while enjoying the comfort and convenience of a modern 'floating resort,'" said Bob Dickinson, Carnival president and CEO. "CARNIVAL SPLENDOR represents a new class of 'Fun Ship' offering a number of innovative facilities and features and, for its inaugural season, we've assembled a truly diverse schedule that showcases the fascinating cultures, history and architecture that has made Europe such a sought-after cruise destination," he added.

Dickinson noted that with its all-inclusive amenities and diverse itineraries, a "Fun Ship" cruise is already the most affordable way to see Europe and the high dollar/euro ratio makes this value even greater. He added that in addition to experiencing an all-new class of "Fun Ship," CARNIVAL SPLENDOR's Northern Europe cruises also offer an exciting new option for those guests who have sailed on the line's Mediterranean program in the past.

CARNIVAL SPLENDOR is slated to debut July 13, 2008, with a 12-day Northern Europe cruise departing from Dover -- the first of five voyages within the programme. Other departure dates include July 25 and August 6, 18 and 30, 2008.

Guests will have the opportunity to experience and explore a spectacular variety of historical and cultural attractions including St. Petersburg's extraordinary palaces, Berlin's Brandenburg Gate, Amsterdam's Vincent Van Gogh Museum, and Copenhagen's Tivoli Gardens just to name just a few.

The two 12-day Mediterranean & Greek Isles cruises will depart Oct. 5 and 17, 2008, calling at Naples, Italy; Marmaris, Izmir (Ephesus) and Istanbul, Turkey, with scenic cruising of the Dardanelles; Athens (Piraeus) and Katakolon, Greece; and Livorno, Italy, as well as an overnight call in Rome (Civitavecchia).

This news is a total 7980 time has been read