Cruises from Italy to Resume While North American Cruises are Delayed 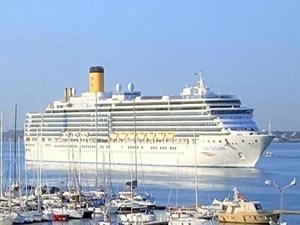 MSC and Costa Cruises both announced plans to restart their cruises from Italy in January after the Italian Government’s requested pause during the holiday season.

The efforts to resume large ship cruising from Italy come as the North American cruise lines are continuing to delay their target dates for a resumption of service.
MSC plans to be the first to resume cruises with its ship the MSC Grandiosa. The cruise ship will resume sailing as planned on January 10, after a temporary pause that started on December 20. Currently, the MSC Grandiosa is scheduled to operate weekly cruises until March 14 from Genoa with stops in Civitavecchia, Naples, Palermo, and Malta. Guests can board the ship in any of the Italian ports, but they are required to test negative for the virus before boarding the cruise and each passenger will have a second test during the cruise.
Previously, MSC Cruises also said that a second cruise ship, the MSC Magnifica, which was due to re-start 10-night voyages in the West and East Mediterranean on December 18 would commence its sailing program on January 15, after the cancellation of three sailings. MSC, however, has not provided an update on those cruises.
Costa Cruises, which also suspended sailing on December 20, announced changes to its cruise program. Carnival Corporation’s Italian brand had resumed sailing in September with its cruise ship the Costa Deliziosa sailing from Trieste and then the Costa Diadema sailing from Genoa. They later started operating their larger flagship the Costa Smeralda from Savona before suspending the cruises to Greece aboard the Costa Deliziosa.
The 180,000 gross ton Costa Smeralda, with a maximum capacity of 6,600 passengers, was due to resume sailing on January 7. The line had announced it would also be dividing the weekly cruise into two short segments of three and four days departing from Civitavecchia. However, citing uncertainty regarding Covid-19 restrictions in the coming weeks, Costa canceled the cruises until January 31.
The cruise line now plans to offer the cruises aboard its smaller cruise ship the Costa Deliziosa. The 92,600 gross ton ship is considerably smaller that the flagship with a capacity of 2,862 passengers. “The decision to operate the Costa Deliziosa will allow greater itinerary flexibility to respond to any changes in the local COVID-19 scenario,” the company said in announcing the revised program.
The cruises in Italy will be in addition to the cruise programs currently operated by AIDA and TUI aboard large cruise ships sailing in the Canary Islands. The only other large cruise ships currently sailing are the ones in Asia.
News of the plans to restart the cruises in Italy came as the lines marketing to North America once again announced delays in their programs. Norwegian Cruise Line canceled the planned March cruises aboard three of its ships from Miami and Port Canaveral. Today, several Carnival Corporation brands also announced delays. Carnival Cruise Line canceled all cruises through the end of March while extending the delay into April for Galveston and deferring other cruises.
Among the North American premium cruise lines, both Holland America Line and Princess Cruises also extended their cancellations. Holland America canceled all cruises through April and delaying some in Alaska till May and June as well as delays for its Mediterranean and Canada New England programs. Princess extended its cancelations until the middle of May.
Several of the cruise ships, however, have returned to U.S. ports for the first time since the summer. They are making reprovisioning stops and beginning the process to meet the U.S. Centers for Disease Control’s requirements for recertifying to resume cruising.