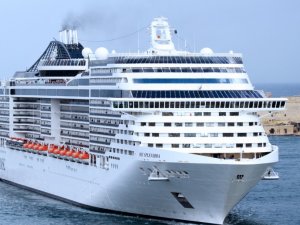 World’s major cruise liner companies have pulled their planned sailings from Shanghai amid efforts to mitigate the potential spread of the coronavirus.

“Due to urgent guidelines from the Chinese government to combat the spread of the coronavirus, MSC Cruises is required to cancel the upcoming cruise with MSC Splendida on January 28,” an MSC Cruises spokesperson confirmed to World Maritime News.

Guests booked on this cruise have the option to receive a full refund of their cruise ticket and port charges, or book an alternative sailing with an equivalent price and receiving additional onboard credit – with an embarkation date before the end of the year.

As informed, MSC Splendida is planned to remain in port for the duration of the cruise from January 28, until February 1.

“We will continue to closely monitor the public health and safety situation in China and are consulting with international and local health authorities, as well as the Ministry of Transport of the People’s Republic of China, and strictly follow their advice and recommendations. Guests and Travel Partners have been informed and will be kept abreast of any further changes as the situation evolves,” the statement reads.

Royal Caribbean’s Spectrum of the Seas, which was scheduled to depart today from Shanghai on its four-day Brest of Okinawa Cruise has also been canceled, USA Today reports.

Furthermore, Costa Cruises has reportedly canceled its planned sailings on four of its ships: Costa Serena, Costa Atlantica, Costa Venezia and Costa neoRomantica, which were planned to take place from Jan. 25 to Feb. 2, according to Express UK.

It is not clear how will the cruise sector in Asia be impacted by these cancellations and how long will these measures be in place. Nevertheless, the extent of the outbreak is still being determined and we are seeing numbers of infections increasing by the hour.

The coronavirus outbreak, stemming from the inland city, Wuhan, Hubei province, has spread to some of China’s port cities such as Shanghai, Guangzhou, Shenzhen, and Tianjin. The virus outbreak coincides with the Chinese New Year in the last week of January when large population movements from China are expected.

As such, additional cases have been identified in a growing number of countries internationally such as South Korea, Japan, Taiwan, Thailand and Singapore as well as one case in the United States.

Over 2,800 cases of coronavirus have been reported so far in China, and the death toll has risen to 80 people, the Shanghai List reports citing the country’s officials.

Countries across the globe are undertaking medical screenings of people coming from China to counter further spreading of the virus. However, the number of infection cases is expected to rise.

This news is a total 2651 time has been read
Tags: coronavirus, MSC Cruises, Royal Caribbean