Cry for help from seafarers 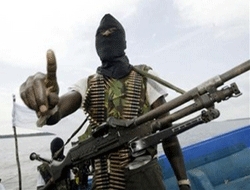 Earlier this week, an Indian vessel belonging to Mercator Lines, carrying a parcel of ATF from Kuwait, anchored off the coast of Somalia and stayed there in the high seas for two days.

India: Seafarers cry for help as piracy on high seas is growing

Earlier this week, an Indian vessel belonging to Mercator Lines, carrying a parcel of ATF from Kuwait, anchored off the coast of Somalia and stayed there in the high seas for two days.

The reason: the crew of the vessel did not want to sail without adequate protection through the pirate-infested waters in that region, which has of late gained notoriety for ship hijacking and piracy. After prolonged talks between the owners of the ship, the crew and the seafarers union, the ship finally lifted anchor and continued on its course.

The ship did leave, but in its wake, left behind the chilling side of the life of seafarers and the Government"s inability to instil adequate confidence in them regarding safety of their lives.

This happened against the backdrop of the hijack of MT Stolt Valor in Somalian waters ?the ship has 18 Indian seafarers. The Government is negotiating for their release with the hijackers through the ship"s owner, but the anxiety among the relatives of the seafarers is reaching its flashpoint.

Just before the Stolt Valor incident, another vessel, Iran Denayat, having three Indian seafarers, was also hijacked in the same region.

In August, hijackers captured an Iranian bulk carrier with a 29-member crew and a Japanese-operated chemical tanker within an hour in the Gulf of Aden.

Then later in the same day, a German-operated cargo ship was hijacked in the same area ? i.e., three hijackings on the same day. And these came two days after a Malaysian palm oil tanker with 30 crew members was seized in the vicinity, according to reports.

?Clearly, such incidents are alarmingly on the rise. In the last nine months, there have been as many as 52 incidents of piracy and hijackings off the coast of Somalia, but the Government is yet to take any concrete measures to instil a sense of confidence among Indian seafarers,? says Mr Abdulgani Serang, General Secretary of National Union of Seafarers of India (NUSI).

As a matter of fact, last month, NUSI had made it clear that ?if the situation does not improve for the seafarers, NUSI will have no other option but to advise the seafarers to boycott and avoid serving on vessels which are trading in these pirate infested areas.?

It pointed that that such a boycott will have far-reaching effects on the economy of the country.

This was stated by the Secretary to the Ministry of Shipping, Mr A.P.V.N. Sarma, during an industry meeting with representatives of NUSI and the Indian National Shipowners Association (INSA) on September 30, sources told Business Line.

But this is providing little re-assurance to the seafarers, especially with the Defence Ministry ruling out any direct intervention by Indian warships to rescue the Indian seafarers aboard the hijacked vessel Stolt Valor, as it would have wider ramifications.

This news is a total 1887 time has been read