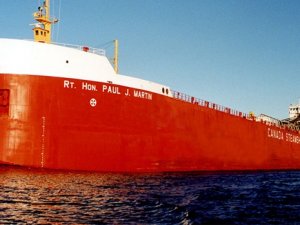 Seaway traffic is being allowed past a ship that ran aground Sunday evening in the St. Lawrence River between Ogdensburg and Waddington.

Veteran shipwatcher Michael Folsom is monitoring the situation closely. He reports via Twitter that the Rt. Hon. Paul J. Martin ran aground just outside the shipping channel west of Cardinal, Ontario.

That puts the Canadian-registered vessel on the Canadian side of Galop Island across from Red Mills in the town of Lisbon.

Folsom reports ships were being allowed to transit the Seaway past the grounded ship by mid-Monday morning. Earlier, all ships between Massena and Cape Vincent were instructed to go to anchorage to await instructions as officials investigated the grounding.

There’s no word about what caused the ship to go aground.

Folsom says the area along the island is known for several high spots with rocks. He says the depth is 20 feet near where the ship is stopped.

According to the U.S. Coast Guard, the vessel is taking on water at a slow rate, but installed pumps are keeping up with the rising water.

According to reports, marine traffic is now being allowed to pass by the grounded vessel.

The United States Coast Guard has responded to the incident and is now working with the St. Lawrence Seaway Development Corporation on a salvage plan.

Coast Guard officials say the ship is taking on water at a slow rate but no fuel or cargo tanks have been breached.

Water pumps have also been installed.

The vessel was en route to Quebec City with a load of iron ore.

The RT. Hon. Paul J. Martin is 740 feet long and is described as a self-charging bulk carrier.