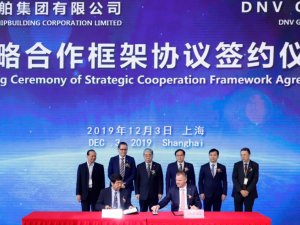 A framework agreement was signed at Marintec China on December 3, 2019.

As informed, the duo will focus on developing future-proof solutions and competencies for shipping in a variety of fields including alternative fuels and environmentally friendly technologies, new vessel designs to meet the International Maritime Organization (IMO) greenhouse gas (GHG) targets, digitalization and cyber security.

Other areas of research and exchange are the design and building of large offshore floating structures, deep sea mining and agriculture, and ocean research activities.

Under the framework agreement, DNV GL will support CSSC in its project engineering, construction and installation process by offering classification, certification, verification, consultancy, software and joint development services to the shipbuilding group.

“We have worked together on a number of … projects already this year, and with the merger of CSSC and CSIC I am confident the strategic agreement now signed will create even more joint opportunities in our targeted markets,” Remi Eriksen, Group President & CEO of DNV GL, commented.

“CSSC and DNV GL have been long-standing friends. The new strategic agreement will further strengthen our cooperation and expand its scope,” Lei Fanpei, CSSC Chairman, said.

During the trade fair, DNV GL and CSSC group shipyards have already announced several joint projects, including an approval in principle (AIP) to Hudong-Zhonghua shipyard for the design of a gas-fueled 25,000 TEU container vessel, which would be the largest ship of its type to date, and a JDP with Huangpu-Wenchong Shipbuilding Company for a new energy-efficient 5,000 TEU Panamax containership for the fast-growing intra-Asia trades.

AIPs were also presented to CSSC’s ship design consultancy SDARI for the design of a 93,000/135,000 cbm very large ethane carrier (VLEC), as well as to Dalian Shipbuilding Industry Co. for a concept design of a box-type self-elevating offshore fish farming unit.

This news is a total 409 time has been read
Tags: CSSC, DNV GL