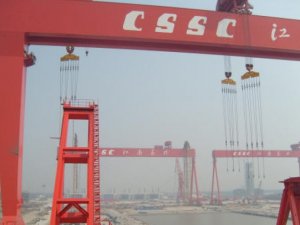 According to state-run CSSC, Luxemburg-based owner CLdN Bulk refused to take delivery of a 180,000 dwt capesize built by Waigaoqiao Shipbuilding in March and requested a refund, as the company believed that the vessel’s navigation speed didn’t meet the right standard.

In August, Waigaoqiao Shipbuilding terminated the vessel contract with CLdN Bulk and sold the vessel to another company in November.

The two companies have entered an arbitration process in London and the case is scheduled to be heard in May 2017.

Meanwhile, Norwegian owner Torvald Klaveness Shipping has requested compensation from CSSC Chengxi Shipyard for a torsional vibration damper defect of a 71,900 dwt bulker delivered by the shipyard in 2013.

CSSC Chengxi Shipyard refused the compensation as it believed that it was the user’s fault that caused the problem.

Torvald Klaveness Shipping has initiated an arbitration process in London.

This news is a total 944 time has been read
Tags: CSSC in dispute over two vessel contracts