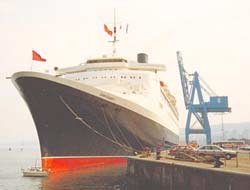 QE2 40th Anniversary Cruise not held up by fault.

QE2 40th Anniversary Cruise not held up by fault.

The famous Cunard liner QUEEN ELIZABETH 2 is to be back on schedule for her special Round Britain cruise to celebrate 40 years since her launch in Clydebank on the 20th September 1967.

The ship was stranded for a day at the port of Dubrovnik on Friday 7th August after a mechanical failure which was fixed by engineers and she left port on Saturday, bound for Trieste.

Her 40th Anniversary cruise will herald the final year of operations for the vessel as after her last farewell voyage round Britain in 2008 she will head for Dubai where she will become a floating hotel.

This year's British cruise will see her sail from Southampton on the 15th September taking her to many ports around the UK, with historic significant calls at Tyneside where she will visit for the first time and to the river of her birth, the Clyde, where she will dock at Greenock on the 20th, downriver from the John Brown shipyard where she was launched 40 years ago to the day.

This news is a total 4584 time has been read