Cut offer in the cost of chartering 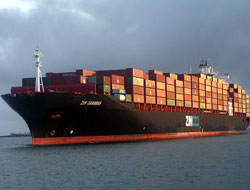 ZIM is offering shipowners equity in return for cuts in the cost of chartering ships as it struggles to avoid insolvency.

ZIM is offering shipowners equity in return for cuts in the cost of chartering ships as it struggles to avoid insolvency.

One of the world's fastest-growing container shipping lines is offering shipowners equity in return for cuts in the cost of chartering ships as it struggles to avoid insolvency. The offer by Zim Israel was disclosed in a lengthy announcement to the Tel Aviv stock exchange by the Israel Corporation, its parent, which is planning to lend Zim $350m to stay solvent during the worst-ever downturn for container shipping. Zim will offer owners of the 59 ships it currently charters convertible notes in return for cuts in charter rates.

According to Paris-based AXS-Alphaliner, Zim operates a total of 97 ships, including ships it owns directly. The fleet has the world's 16th-highest capacity.

However, at the height of the sector's boom, Zim had enough ships on order to double its ship capacity. It still has orders equivalent to 85.8 per cent of capacity but is seeking to postpone their delivery.

Fast-growing lines have been particularly hard hit by container shipping's worst-ever slump . Many face substantial obligations to pay for new ships. They also tend to operate newer ships bought at the high prices that prevailed at the height of the sector's 2002- 2007 boom.

The release warns that Zim, which had turnover of $4.33bn in 2008, will lose $1bn cash over the next four years. It also makes clear that, without immediate action, Zim risks insolvency. The Israel Corporation has already this year lent Zim $100m to keep it operating, while talks with its banks go ahead.

The stock exchange filing goes on to say: "Providing the loan amount by the company [the Israel Corporation] to Zim, considering Zim's condition, is required and essential to the continuation of Zim's operations."

Zim's offer to shipowners follows a similar offer made by Chile's CSAV container line this year as it was struggling to avoid collapse amid a worldwide slump in container volumes and in the rates earned per container shipped. Owners of ships chartered by CSAV mostly accepted the offer of shares and reduced charter rates to avoid its collapse.

Of Zim's chartered ships, 19 are owned by companies associated with the Ofer family, who control Israel Corporation. The family controlled companies have agreed to the rate reductions. However, it remains unclear whether unrelated shipowners - who are mostly based in Hamburg, Germany, and who have acute problems of their own due to the crisis in container shipping - will accept the deal.

Zim said the long-term arrangement being formulated would ensure that it emerged financially stable and stronger, and able to prosper once global financial markets recover.

This news is a total 2376 time has been read