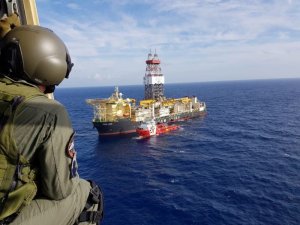 Cyprus accused Turkey on Friday of threatening to use force against a drillship chartered by Italy’s Eni, in a standoff over hydrocarbons rights in the eastern Mediterranean.

There was no immediate reaction from Turkey, which has vowed to prevent Greek Cypriots from exploring for oil or gas around the ethnically-split island. Turkey says some areas of Cyprus’s offshore maritime zone fall under its jurisdiction.

On Feb. 9, the Turkish navy on manoeuvres in the Mediterranean stopped the Saipem 12000 vessel on its way to drill for gas in the waters off Cyprus, triggering a diplomatic standoff that has underscored tensions in the region over competing claims for offshore resources.

Turkey, which does not have diplomatic relations with European Union-member Cyprus, this week extended military exercises in the eastern Mediterranean to March 10.

The Saipem 12000 vessel was on its way to Morocco, an Eni spokesman said. Its chief executive said on Thursday it was very likely the drilling ship would have to be moved to a new location in the coming days. Local media reported earlier on Friday it was heading to Limassol in Cyprus.

Cyprus will officially protest to international forums over the latest incident, Papadopooulos said.

Cypriot President Nicos Anastasiades addressed his fellow European Union leaders on Friday in Brussels on the issue. He said this week that Cyprus was determined to press ahead with its plans for oil and gas exploration.

EU leaders expressed solidarity with Cyprus and European Council President Donald Tusk said the bloc was calling on Turkey to stop activities that have led to recent incidents.

Eni and France’s Total discovered this month a promising natural gas field off Cyprus, which they said looked geologically similar to the mammoth Zohr field off Egypt.

This news is a total 888 time has been read
Tags: Cyprus Says Turkey Blocking Drillship in Eastern Mediterranean Drilling Standoff