Cyprus to Pursue Exploratory Drilling in Mediterranean Amid Standoff with Turkey 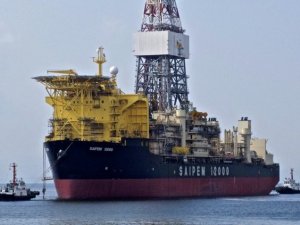 Cyprus said on Wednesday it would press ahead with oil and gas exploration, signalling resolve in a standoff with Turkey over access to potential energy riches after Ankara extended military exercises in the eastern Mediterranean to early March.

Cyprus has accused Turkey of obstructing a drill ship exploring for natural gas off the ethnically-split island on Feb. 9, highlighting tensions in the region over competing claims for offshore resources.

The Saipem 12000 vessel is contracted by Italy’s state-controlled Eni which along with France’s Total operates the Block 3 of Cyprus’s economic zone.

The ship was headed to that area when it was blocked by Turkish warships. Turkey issued a new navigational advisory this week extending military training to March 10.

“Our goal is to fully explore Cyprus’s hydrocarbon potential, in the best terms possible, so as to maximize the benefits for all the people of Cyprus,” President Nicos Anastasiades said in a statement on Wednesday, adding that Cyprus’ planning in the field of energy would proceed.

Anastasiades, who later met political leaders, also said the government had submitted a bill to parliament setting up a sovereign fund to manage any future hydrocarbon resources.

Eni and Total announced earlier this month finding a promising gas field off Cyprus, which looked geologically similar to the mammoth Zohr field off Egypt.

Turkish Cypriots run a breakaway state in north Cyprus recognised only by Ankara. Turkey, which does not have diplomatic relations with Cyprus, claims that some areas of Cyprus’s offshore maritime zone fall under the jurisdiction of Turkey or Turkish Cypriots.

“The use of these resources must be handled in such a way as to provide economic benefits to both sides,” Northern Cyprus Energy Minister Ozdil Nami told the Anatolian News Agency.

This news is a total 821 time has been read
Tags: Cyprus to Pursue Exploratory Drilling in Mediterranean Amid Standoff with Turkey