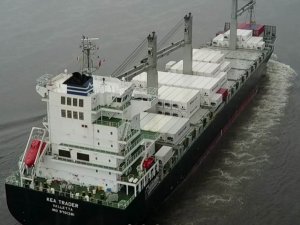 Initial progress is being made to remove container units from the containership Kea Trader, following the successful removal of heavy fuel oils from the vessel.

Nevertheless, Lomar Shipping, the vessel's owner, has admitted in a release in anticipates its seven month old ship has experienced ''considerable'' damage. The 2,194 teu ship ran aground off New Caledonia seven weeks ago.

A large storm in the South Pacific resulted in crew and the majority of salvage workers being taken off of the Kea Trader as a safety precaution at the start of this week.

Limited breaks in poor winter weater conditions have now allowed the removal a total of 55 of the vessel's 756 containers, initially using the ship's own cranes. They were transferred onto barges that managed to safely come alongside during calmer weather conditions, and were subsequently taken Noumea, in New Caledonia.

Operations to remove further containers have stepped up a gear this week with the arrival of a specialist Sikorsky Skycrane heavy lift helicopter, which arrived by ship in Noumea and began operations on site yesterday.

A crane barge is currently being towed from Singapore to the site.

This news is a total 751 time has been read
Tags: Damage to seven month old grounded Lomar boxship 'considerable'