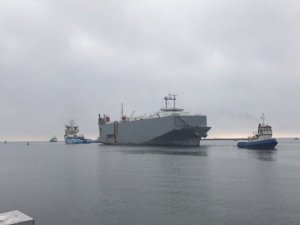 The damaged car carrier Makassar Highway was been moored in Oskarshamn on Thursday after salvors completed its emergency tow from open waters of the Baltic Sea.

The 139-meter car carrier ran aground last Monday, July 23, off Loftahammar, Sweden, causing extensive damage to the hull plates and water ingress. Before salvors could address oil contained in breached tanks, the ship floated free on its last weekend, causing oil to leak from the ship.

Salvors called for an emergency tow of the vessel on Tuesday, fearing the condition of the ship would worsen if it were left in place.

The Coast Guard reported Wednesday a minor oil leak of about 100 liters occurred during the tow, but most of what was released was captured by a trailing skimming vessel.

The ship was initially reported to be carrying approximately 400,000 liters of fuel oil and lube, the extent of which was released not yet determined.

The Coast Guard said that an investigation into the cause of the initial grounding is still on-going.

Oil pollution prevention will containue while the ship is in port.