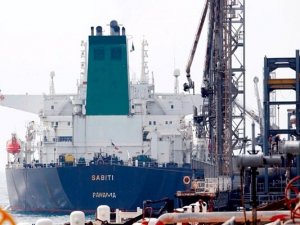 TEHRAN, Oct. 21 (MNA) – The targeted Iranian tanker Sabiti that was hit by two rockets 60 miles off the coast of Saudi Jeddah port city on October 11 has arrived at the Iranian territorial water in the Persian Gulf.

Sabiti, an Iranian tanker whose hull was damaged in a missile attack off Saudi Arabia earlier this month, will be repaired in Bandar Abbas.

According to a report by the National Iranian Tanker Company (NITC), Sabiti entered the Iranian territorial water on Monday, 10 days after it was targeted with two missiles about 60 miles off the coast of Saudi Jeddah port city in the Red Sea on October 11. The NITC report added that the oil tanker will anchor in the waters of Iranian Kharg Island in the Persian Gulf within two next days to be unloaded and later fixed in Bandar Abbas.

On October 21, Hamid Rezaeian Asl, CEO of Iran Shipbuilding & Offshore Industries Complex (ISOICO), said that the ship will be repaired by domestic engineers and manpower of the company.

The 159,681 dwt Sabiti entered the Iranian territorial waters on Monday, ten days after it was targeted by two missiles of the port of Jeddah, the National Iranian Oil Company (NIOC), the owner of the vessel, confirmed in a separate statement.

According to NIOC, the oil tanker will anchor in the waters of the country’s Kharg Island in the Persian Gulf for cargo unloading as well as technical inspection. It will be later fixed at the shipyard in Bandar Abbas.

the two separate explosions caused heavy damage to two of the ship’s oil tanks, resulting in an oil spill in the Red Sea which was subsequently contained.

Abbas Mousavi, a spokesperson of the Iranian Ministry of Foreign Affairs, recently said that the attack on the Iranian tanker “was backed by a foreign government”, adding that Iran reported the incident to the United Nations.