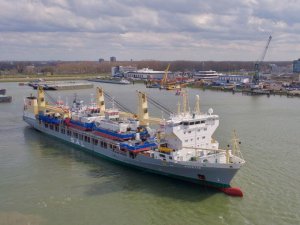 Damen Shipyards has completed the on-time delivery of a complete 19-vessel order to AAS Amur Assets Shipping Limited, a joint venture set up by Combi Lift GmbH to support its role in the construction of the Amur Gas Processing Plant "Gazprom" 150 km from Russia's border with China.

The Multicats and Pusher Tugs were handed over in a ceremony at Damen Shipyards Gorinchem prior to being loaded on to a heavy lift vessel at Rotterdam to make their way to the Russian port of De-Kastri on the Sea of Okhotsk, where they arrived at the beginning of May.

Meanwhile the 89 m pontoons and 86 m side floaters, which had been built at a Damen facility in China, departed Shanghai on a heavy lift ship, making their much shorter journey to De-Kastri in time to arrive at the same time as the Dutch consignment.

All the vessels have been customized to enable them to navigate the very shallow inland waters in which they will operate, especially the Zeya River. Reducing the weight where possible and stretching the length and beam has increased buoyancy and reduced draft, while raisable wheelhouses on the tugs will ensure clear views over extra-large cargos.

The Side Floaters 8605SD will also play an important role in delivering lateral ballastable buoyancy to the Stan Pontoons, further minimizing their draft when loaded with cargo.

The fleet has now begun its mission; playing an important role in moving a significant proportion of the 176,000 tonnes of equipment and material that Combi Lift is responsible for bringing to the site of the new gas processing plant. This includes some sizable components such as 12 columns weighing 900 tonnes each.

"We appreciate Damen's professionalism, good teamwork and smooth handling of all production processes," commented Heiko Felderhoff, CEO at Combi Lift. "A punctual and reliable delivery of the tugs was essential for the progress and success of this important project. We are very satisfied with the great teamwork and the quality of all the tugs"

Damen Sales Manager Remko Bouma added: "We really appreciated the order from Combi Lift. With the contract signed in June 2017 we had just ten months to construct the vessels but, through hard work, good project management and close cooperation between Damen and Combi Lift, the result has been highly satisfactory for all parties. By working closely together the teams from both organisations were always able to find the necessary solutions and, once again, Damen's portfolio of standard designs has shown how flexible it can be when it comes to adaptation for specific needs and environments."

This news is a total 1170 time has been read
Tags: Damen completes delivery of 19 vessel order