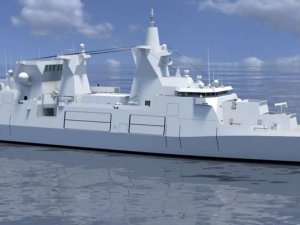 Dutch shipyard Damen Schelde Naval Shipbuilding, together with its partners Blohm+Voss and Thales, has won a tender for the German Navy’s MKS 180 multi-purpose combat ship project.

The announcement was made by Germany’s Federal Ministry of Defense on January 14, 2020.

The decision is yet to receive parliamentary approval in Germany, according to the ministry.

In April 2019, shipbuilders German Naval Yards Kiel- (GNYK) and Damen-led teams were invited to submit their final bids for the project. Following the evaluation, Damen was selected as the preferred bidder.

Under the program worth more than USD 5 billion, the navy plans to build at least four and up to six MKS 180 ships that would have a displacement of around 9,000 tons and a length of 155 meters. The core crew of the ships would be a complement of 110 while an additional 70 crew would be in charge of the mission modules.

The ships will be built at Blohm + Voss shipyard in Hamburg and at other shipyard locations of the North German Lürssen Group, the parent company of Blohm + Voss, Damen said in a separate statement.

In this way, around 80% of the total net investment will be spent in Germany. The same applies to the electronic application systems that are supplied by Thales Nederland to its own design. Around 70% of the services will be provided by the German subsidiary of Thales and by other German subcontractors.

MKS 180 is envisioned as a modular ship, meaning that it will be capable of assuming anti-submarine, anti-air and surface warfare missions. The navy wants the ship to have all potential mission modules onboard to be capable of exchanging them on a “Flexdeck” without having to go into port. Another desired module would contain a diving chamber and mine warfare equipment.