Danaos aims to save fuel with seven-vessel recoating 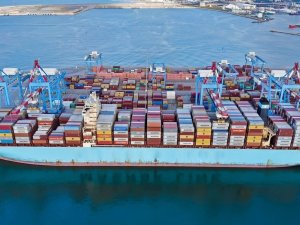 Nippon Paint Marine has completed more than 20 drydocks for Danaos since 2014 and the A-LF antifouling coating has been applied to nearly half of Danaos’ 60-vessel fleet.

Commenting on the coating’s fouling protection and fuel-saving performance, Danaos deputy chief operating officer and technical director Vastarouchas Dimitris said it was “vitally important” to the company to reduce its environmental impact and added “Based on many years’ experience with Nippon Paint Marine, we have found the application of A-LF Sea contributes positively to reduced drag and, consequently, lower fuel consumption and fewer CO2 emissions.”

The vessels will also feature a low-friction antifouling Ecoloflex SPC 150 HyB coating. Danaos said it is also considering Nippon’s new Aquaterras coating as a way of further reducing the impact of operations on the marine environment.

A-LF Sea is based on patented copper silyl acrylate copolymer technology with a high volume of solids to provide antifouling performance over long periods and has been applied to more than 3,000 ships worldwide.