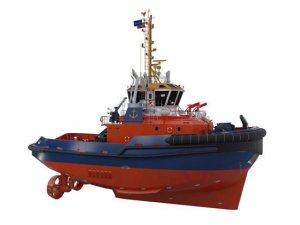 It has built Hermes to a Robert Allan RAmparts 3000 design for the Danish Port of Aarhus, with delivery expected in Q3 2021.

This azimuth stern drive (ASD) tug has young ice I class notation for operating in the port during winter.

It has an overall length of 30.3 m and breadth of 11.8 m. Uzmar is installing a pair of Cummins QSK60 engines, compliant with IMO Tier II emissions requirements, each developing 2,013 kW of power.

There is an additional driveshaft linking the port and starboard thruster units for Schottel’s Sydrive-M mechanical hybrid innovation.

This allows one engine to be shut down when the tug is not assisting a ship, while the other engine provides power to both thruster units.

Hermes will have free-running speed of 12.5 knots and bollard pull of 65 tonnes. In another configuration, the power of the starboard engine can be dedicated to a large fire pump mounted to the front end of the engine.

At the same time, the power of the port engine is committed to both thrusters giving the operator full manoeuvring control of the tug while holding it in the best position for fire-fighting.

“We can confidently say this project will be a revolution in the towage operations and a great milestone for our green tug solutions,” said Uzmar chief executive Noyan Altuğ.