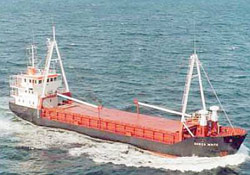 Danish vessel taken into Somali waters, fears for her crew.

Danish vessel taken into Somali waters, fears for her crew.

A small Danish-owned and, we understand, Danish-crewed general cargo vessel, has been captured by pirates in the latest series of ships and fishing vessels being boarded and taken over, with their crews held to ransom, off the Somalia coast.

The vessel, (erroneously called DONICA WHITE in many reports, she is in fact DANICA WHITE) owned and operated by H. Folmer & Co. Copenhagen, Denmark, was on a voyage from Dubai to Mombassa in Kenya with a cargo of building materials.

About 240 miles off the Somali coast she was intercepted and captured by what are presumed to be Somali pirates. A French warship reportedly looked on as the event unfolded, and refused to enter Somali waters as the mv DANICA WHITE was taken into the region. It is understood she is now anchored in Hobyo, 700 km from Mogadishu.

Reportedly Danish authorities are awaiting whatever demands the pirates make. Some experts fear it could be very high indeed considering the captives are Danish nationals.

An Indian dhow and three fishing vessels have also been captured and some reports say a Taiwan fisherman has been killed.

The waters are said to be 'infested' by pirates but the fact that this latest, and some previous, have occurred so far out from the coast, many experts feel that a 'mother ship' could be involved as they think it highly unlikely that small craft could roam around so far from home awaiting their prey. However, the type of 'small craft' does not appear to be described anywhere in reports so far.

This news is a total 652 time has been read