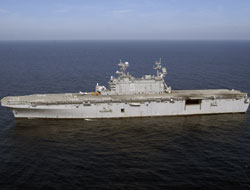 The suspected pirates are handed over to authorities in Yemen.

A Danish naval vessel last night rescued a group of suspected pirates in the Gulf of Aden after receiving a distress signal from their vessel, which was in difficulties in heavy seas.

A statement from the Danish navy said that its warship Absalon was bound by international law to help the men and that the crew discovered a number of weapons onboard the vessel, similar to those often used in pirate attacks on merchant ships.

?Due to the weather, it was not possible to take the troubled ship in tow and it was destroyed in the interest of shipping safety,? the statement added.

The men were later handed over to authorities in Yemen.

This news is a total 1076 time has been read