Deal in principle reached on Ever Given 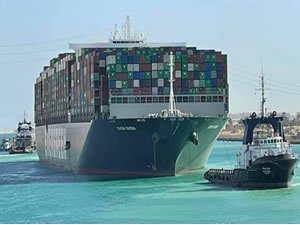 An agreement in principle has been reached over a compensation claim between the Suez Canal Authority (SCA) and the owners of the 20,388 teu Ever Given that blocked the Suez Canal in March this year.

“Following extensive discussions with the Suez Canal Authority’s negotiating committee over the past few weeks, an agreement in principle between the parties has been reached,” Shoei Kisen’s insurer, the UK P&I Club and their legal representative, Stann Marine said in a statement.

“Together with the owner and the ships’ other insurers, we are now working with the SCA to finalise a signed settlement agreement as soon as possible.”

The deal follows a recently increased offer from Shoei Kisen to free the 400 m long ship after an initial offer of $150m. Last month, the SCA lowered its claim to $550m from its original demand of $916m.

Court proceedings were recently put on hold to allow the parties to reach a deal after the increased offer was made.

“Once fomalities have been dealt with, arrangement for the release of the vessel will be made,” the UK Club statament said. Financial details surrounding the settlement have not been disclosed.

The Ever Given has been kept at the Great Bitter Lake by Egyptian authorities since March 29.

This news is a total 1772 time has been read
Tags: Egypt , Ever Given , Japan , Taiwan , Stann Marine , deha24maritimenews