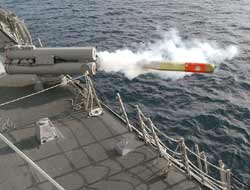 The U.S. Defense Department has notified Congress of a planned sale to Turkey's Navy of 100 advanced MK-54 torpedoes and related equipment and services worth more than $100 million, the Pentagon said.

Turkish Navy to buy US torpedoes

The U.S. Defense Department has notified Congress of a planned sale to Turkey's Navy of 100 advanced MK-54 torpedoes and related equipment and services worth more than $100 million, the Pentagon said.

The DSCA notified Congress last Thursday. The sale decision will take effect automatically unless at least one U.S. senator raises an objection within 14 days. But the Pentagon generally consults Congress before formally notifying it of a sale, and as a result such objections are extremely rare.

The total value, if all options are exercised, could be as high as $105 million, it said.

Turkey plans to use the MK-54 torpedo on a number of platforms, including on its U.S.-made Perry-class frigates and S-70B Seahawk naval helicopters.

"The Turkish Naval Forces Command has significant experience with modern weapon systems, particularly the MK-46 Mod 5A(S) torpedo, the direct predecessor to the MK-54 and a torpedo of similar complexity and capability," the DSCA said.

"The MK-54 torpedo was designed to be easily integrated into the upgrade path of the MK-46 torpedo and uses the same maintenance/support equipment and infrastructure with minimal upgrades," it said.

"Turkey maintains a robust MK-46 program, which it intends to upgrade to support the MK-54 torpedo."

The prime contractor will be Raytheon Company Integrated Defense Systems, based at Keyport, Washington.

"Turkey is a political and economic power in Europe and the eastern Mediterranean, and a partner of the United States in ensuring peace and stability in those regions," the DSCA said. "It is vital to the U.S. national interest to assist our NATO ally in developing and maintaining a strong and ready self-defense capability that will contribute to an acceptable military balance in the area. This proposed sale is consistent with those objectives."

It also said that the planned sale would not adversely affect either the military balance in the region or U.S. efforts to encourage a negotiated settlement of the Cyprus issue.

"The proposed sale of torpedoes will materially assist the Turkish Naval Forces Command in NATO, United Nations, and coalition operations such as the United Nations Interim Force in Lebanon and BLACKSEAFOR in the Black Sea and Eastern Mediterranean regions," the DSCA said.