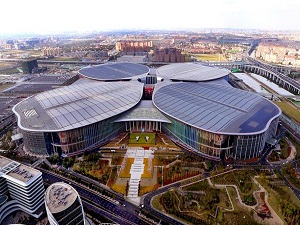 The China International Import Expo ended on Saturday, with the value of intended deals topping over $57.8 billion, according to the CIIE Bureau. Belt and Road deals made up about $4.7 billion of this.

The expo, held in Shanghai, was attended by over 3,600 companies from 151 countries. The Bureau reports that deals relating to high-end intelligent equipment were worth over $16.5 billion, consumer electronics $4.3 billion, autos $12 billion, food and agricultural products $12.7 billion and trade services $3.2 billion.

Chinese President Xi Jinping opened the event saying it was "a major measure for China to take the initiative to open its market to the world. All countries should be committed to opening up and oppose protectionism and unilateralism in a clear-cut stand." With the slogan "New Era, Shared Future," the expo was the brainchild. "China will not close its door to the world and will only become more and more open," Xi said.

By 2021, China is expected to add $1.8 trillion in new consumption, which will be roughly the size of Germany's consumer economy and more than 25 percent of overall growth in consumption in major economies. Despite the on-going trade dispute between the world's largest economies, around 180 U.S. companies attended including Whirlpool, Boeing, Microsoft, Google and Intel.