Deaths at a shipyard in ?stanbul's 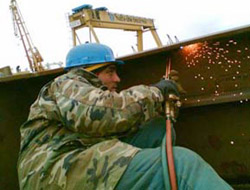 Following yet another death at a shipyard in ?stanbul's Tuzla district only two days ago, increasing the total number of deaths to 15 over the last seven months...

Laws to change, fines to increase after deaths at shipyards

Following yet another death at a shipyard in ?stanbul's Tuzla district only two days ago, increasing the total number of deaths to 15 over the last seven months, the Labor Ministry has gone on alert and has decided to seek solutions with representatives of worker and employer unions.

The first step to be taken is to increase fines for employers who do not provide a safe work environment, prompting a call for changes to the labor law. Currently, the fine for an unsafe jobsite safe ranges from YTL 88 to YTL 900. The ministry hopes increasing these fines significantly will push companies to improve safety.

Shipbuilding has become one of Turkey"s fastest growing sectors in recent years. Shipyards have received orders through 2012 and are working at full capacity to complete and deliveries the orders on time. The main problem of the sector is frequent fatal accidents. The Labor Ministry has established a commission to investigate the causes of these accidents and to propose necessary preventative measures.

Another reason for the accidents is a lack of space at shipyards. The number of workers has increased to nearly 22,000 at the Tuzla shipyards, compared to 3,000 five years ago. However, the shipyard"s surface area has remained the same. As the business traffic increases, space for operations gets narrower and raises the risk of accidents.

Labor Ministry inspections have been conducted over the last five months and will continue through the end of this month. Inspectors are investigating which worker works for which subcontractor and checking the workers" wages, work hours and whether they have insurance and are granted vacation time and sick leave. The inspectors are also checking to see whether there are foreign or illegal workers at shipyards. After the completion of the inspectors" report, companies not fully complying with the law will be severely punished.

Labor Minister: Main reasons are subcontracting and lack of education

The Minister of Labor and Social Security Faruk Çelik replied to questions from reporters on the issue during a meeting with Serbian Minister of Labor and Social Policies Rasim Ljajic yesterday. He said the main two reasons behind the accidents were subcontracting and a lack of education. He said the concerned bodies will submit to him a final draft on the subcontracting system and will conduct more research to address the issue on legal grounds. He also said they will improve training at shipyards to increase the workers" awareness of their rights.

There have been 50 fatal accidents in the last seven years and 15 in the last seven months at Tuzla's shipyards. The deaths mainly happen through electric shocks and falls from platforms. According to the Labor Ministry report, between December 2006 and September 2007 two workers died after falling, two due to heart attack, three from electric shock and one worker was crushed to death.

Furthermore, two workers lost a limb through electric shock or fall. In the same period, there were 376 accidents that resulted in injuries mostly because of falls, electric shocks, crashes, cuts, burns and being crushed.

This news is a total 1162 time has been read