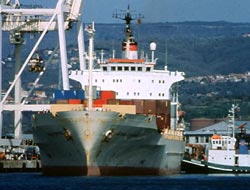 Its latest report on the industry highlighted that the market's tonnage supply cannot be based on the actual fleet number and that deductions must be made for tankers not trading, under-utilised or unavailable to move cargo.

?As our study concludes, port delays can absorb a significant number of vessels ? just the prescription for an over-tonnaged market,? said McQuilling.

According to the marine industry consultants, port delays showed significant rise in 2008 compared to 2007, ?particularly in the VLCC and suezmax trades which account for the majority of tanker tonne-mile demand.?

A study of over 1,800 fixtures found that the average time spent in port for a VLCC increased from 2.6 days to 4.3 days year-on-year.

That figure moved from 3.6 days to 5.3 days for suezmaxes.

?VLCC loadings in the Arabian Gulf [MEG] indicated a 62% increase in port time, and a 122% increase in cargo operations in the Far East with the majority of demurrage claims indicating 'no available berthing' or 'awaiting shore-side readiness' by their vessels' masters,? said McQuilling.

Bad weather was the main reason for 27% rise in VLCC

Bad weather was a factor in shore-side constraints for the big volumes of cargoes Far East bound, and was the main reason for a 27% rise in VLCC stays in the US Gulf.

Storms and shut-downs saw a 35% increase in port times for suezmaxes calling in the US Gulf.

Hurricanes Ike and Gustav caused over a week's worth of closures each in 2008, and visibility-impairing fog brought many more days of port side shut-downs throughout the year across all tanker sectors observed.

On the West African coast, suezmax calls more than doubled their time in port compared to 2007 figures.

Such a spike ?is of no surprise?, said McQuilling, ?given the robust level of political unrest in this region.?

Aframaxes plying the European and Mediterranean routes also saw their stays double year-on-year, as a significant increase in port delays pushed that figure up to an average 4.9 days per calling.

A series of 24-hour strikes by port workers at key hubs like Fos and Lavera protesting privatisation apparently held up as much as 50 tankers at a time in a few incidents throughout 2008.

McQuilling says its models indicate that the effects of port delays have significantly reduced the availability of tonnage to answer global demand.

?These delays have shown little promise of correcting themselves in 2009, and may have the potential to further soak up available tonnage in the marketplace.?

Looking ahead, the US will, of course,  face another hurricane season while current reports say fog conditions will persist.

According to some risk evaluation firms, civil unrest in West Africa continues unabated, and is forecast to increase.

?Port congestion will continue to cause delays worldwide, as refiner and distributors presumable still lack shore-side tankage, and bottlenecks caused by supply chain restraints at under-developed ports are unlikely to change in the current economic turmoil,? said McQuilling.

This news is a total 1068 time has been read