Demand for transport fuel down 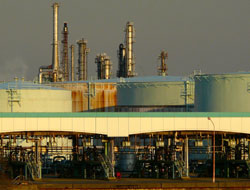 European refiners will cut output in August compared with the previous three months as they expect a fall in demand for transport fuels as the northern Hemisphere summer holidays draw to an end.

European refiners will cut output in August compared with the previous three months as they expect a fall in demand for transport fuels as the northern Hemisphere summer holidays draw to an end.

European refiners will cut output in August compared with the previous three months as they expect a fall in demand for transport fuels as the northern Hemisphere summer holidays draw to an end. Lower demand will squeeze already thin profit margins.

Refiners in Europe are likely to run their plants at an average 80 percent of capacity in August and probably in September.

Operating rates have been about 85 percent since May, according to data from industry monitors Euroilstock.
Europe, excluding Turkey, has combined capacity to process about 16 million barrels of crude oil per day.

"We do expect refinery utilisation rates to be significantly lower in the third quarter than the second quarter because of lower margins," Damian Kennaby, principal of energy consultant Purvin and Gertz.

Oil refinery run cuts have been the global trend this year, including in the United States, the world's top oil market, and in Asia, especially Japan.

Because of the lower refinery runs this year, crude oil inventories are likely to remain higher than last year, while product stocks will be mostly lower in Europe.
The exceptions will be middle distillates, such as jet fuel, heating oil and diesel, because in Europe industry demand for these products has fallen more sharply than output has been cut.

Globally, industrial demand has fallen very sharply, but not as much as in Europe, where the overhang of middle distillates, key for European refiners, will keep their profit margins thin.

Societe Generale expects oil refining margins for northwest Europe to fall to $3.8 a barrel in the third quarter and $2.5 in the fourth, averaging $3.7 in 2009, compared with $6.5 last year.

The bank uses the 5-2-2-1 crack to assess margins.
Typically, refiners should be ramping up runs by the third quarter to meet demand for gasoline and diesel during the summer driving season and for heating oil in winter.

But poor margins have led them to leave a lot of capacity offline following maintenance that typically peaks during the periods of lowest demand at the end of the first quarter and beginning of the second quarter.

Throughout last year, when supply was especially tight due to tightening of sulphur specifications, refiners ran their plants at about 89.50-92.50 percent of capacity.

By region, Northwest Europe, including France and Britain, is likely to have steeper run cuts than the Mediterranean in August.

Trade and industry sources said Total would run the Gonfreville refinery, France's largest, at about 60 percent of capacity, while cutting runs at its coastal refineries in the country by about 20 percent.

Petroplus has kept its Teesside refinery in northern Britain closed since March.

Europe's largest independent oil refiner said earlier this year its plants across Europe would run below their name-plate capacity for the rest of 2009.

Industry officials have said very few refineries were currently cutting runs in the Mediterranean after extensive maintenance work, run cuts and unplanned outages in the second quarter eased supply gluts in the area.

Spain's Repsol restarted its Cartagena refinery in July after being closed since April due to weak margins.

However, Mediterranean margins have fallen to negative occasionally and refiners may have to lower output, some industry officials said.

This news is a total 3508 time has been read