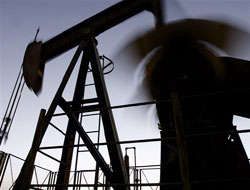 The International Energy Agency cut its forecast for global oil demand next year by 0.5 percent as the worst financial crisis since the 1930s threatens a global recession.

The International Energy Agency cut its forecast for global oil demand next year by 0.5 percent as the worst financial crisis since the 1930s threatens a global recession.

The IEA lowered its 2009 projection by 440,000 barrels a day to 87.2 million barrels a day, the Paris-based agency said today in its monthly report, citing a weaker economic outlook from the International Monetary Fund.

Non-OPEC supply growth this year has been ''largely wiped out'' after hurricanes in the Gulf of Mexico and pipeline disruptions in Azerbaijan. The agency reduced its estimate for 2008 for the seventh time this year.

The following are the basic points of IEA"s report:

- Oil prices declined in September and early October, as demand growth weakened further, offsetting the impact of hurricane-related outages and lower OPEC output. US crude futures fell from around $100/bbl in early September to below $90 in early October.

- September OPEC crude supply fell 0.3 mb/d to 32.3 mb/d, largely due to unplanned outages. The 9 September OPEC meeting, which reinforced output targets, will be followed by an extraordinary meeting on 18 November to discuss the impact of the global financial crisis on the oil market. Effective OPEC spare capacity stands at 2.1 mb/d.

- OECD stocks fell by 5.1 mb in August to 2,645 mb, including notable draws in European crude and US motor gasoline. Hurricanes drove further dramatic draws in US products and could have reduced OECD total stock cover from 54.9 days at end-August to 53.6 days by end-September, according to preliminary data.

This news is a total 815 time has been read