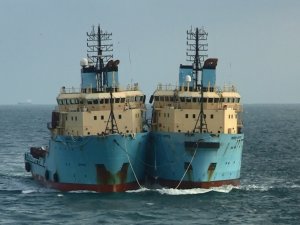 Saying the event was a ‘systematic accident’ not limited to any single factor or root cause.

The DMAIB report details the events and circumstances that led to the loss and foundering of the Maersk Searcher and Maersk Shipper off France following a request for an investigation by the French authorities.

The two Danish offshore supply ships capsized and sank December 22, 2016 in the Bay of Biscay approximately 65 nautical miles off the French coast while being towed by another offshore supply ship, Maersk Battler, while en route to a scrapyard in Turkey.

The supply ships were unmanned at the time and configured in a side-by-side towing setup during the voyage. But during passage through the English Channel, the fenders between the ships on tow failed, and the ships started to collide. The constant battering caused extensive damage to the vessels and eventually compromised the watertight integrity of the Maersk Searcher, causing it to take on water and sink. Subsequently, the Maersk Shipper was also pulled under, so the crew on the Maersk Battler cut both ships loose.

The report stated that the side-by-side towing configuration, which was criticised by some in the aftermath of the incident, was one of three towing methods considered for the job. The two others included a double tow using two winches and a serial tow (one after the other).

In their investigation into the circumstances leading to the accident, the DMAIB describes the accident as ‘systematic’ and unrelated to any single event or action aboard the Maersk Battler at the time.

“It is concluded in the report that the loss of fenders, collision and flooding of the unmanned ships under tow had been addressed in the risk assessment carried out, and that risk mitigating initiatives were in place for each risk item. However, these initiatives were ineffective. The DMAIB concludes that the risk mitigating strategies were mainly focused on preventing risk factors in isolation and left little or no contingency for acute interaction between the risk factors,” the DMAIB report stated.

Maersk Shipper and Maersk Searcher were formerly owned by Maersk Supply Service, but both were sold for scrap earlier in the year due to global decline in the oil and gas industry. Being that the tow of the vessels was part of Maersk Supply Services core services, the job was kept in-house.

This news is a total 1381 time has been read
Tags: Denmark Issues Investigation Report Into Loss of Maersk Supply Ships Off France