Denmark Sends Officers And Frigate To The Strait Of Hormuz 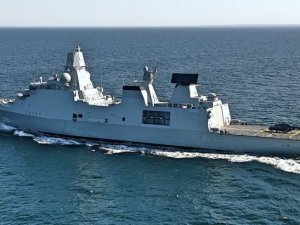 The Danish Government has consulted the Danish Foreign Policy Committee about military contributions to a European-led maritime surveillance mission in the Strait of Hormuz.

The Danish contributions will include a staff officer contribution from the beginning of 2020 and – subject to parliamentary approval in 2020 – a naval contribution beginning in the fall of 2020.

There is another, similar coalition lead by the United States: the International Maritime Security Construct (IMSC). The IMSC was established to deter malign activity, promote maritime security and stability, and ensure freedom of navigation and free flow of commerce in international waters throughout the Arabian Gulf, Strait of Hormuz, the Bab el-Mandeb Strait and the Gulf of Oman. Participants are the United States, Albania, Australia, Bahrain, Kingdom of Saudi Arabia, United Arab Emirates, United Kingdom.