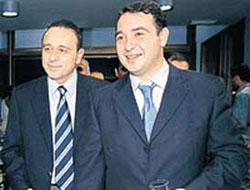 At a time when freight rates hit the bottom and vessel prices decline fifty percent due to the global economic crisis, Ömer and Demir Sabanc? entered in maritime sector.

The cousins will compete with Yalç?n Sabanc? by their company Densa Shipping. Three Sabanc?, who are rivals at sea, act in unison to expand their company Döysa VIP Aviation in aviation sector.

The area of the activity for Densa Maritime Industry and Commerce Incorporation Company, which was established on 22 December 2008 with a capital of 100.000TL, consists of purchasing all manner of vessels, tankers and frigorific means of conveyance within legislation allowance for international and national sea shipment. Main office of the company is located in Üsküdar, Istanbul. Ömer Sabanc? is the chairman of the board and the vice chairman is Demet Sabanc? Çetindo?an.

Demir Sabanc?, one of the partners of Densa Maritime, left Sabanc? Holding in 2004 to start his own business after selling his share of 6.2 for $250m.