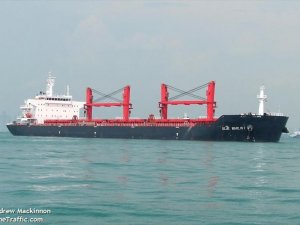 Authorities in South Africa are investigating the death of a deputy sheriff who died while serving an arrest warrant on a vessel at an anchorage off Port Elizabeth last Saturday.

The South African Maritime Safety Authority has confirmed that the officer, Henry Kemp, 42, fell from a height of about eight meters into the ocean while “climbing a steep ladder” to board the Liberian-flagged bulk carrier Blue Marlin 1, which was anchored about 4 miles off South Africa’s Port of Port Elizabeth.

SAMSA said Kemp had boarded a pilot boat at the nearby Port of Ngqura on Saturday to deliver the warrant to the Master of the vessel.

Kemp’s body was recovered from the water at about 7:15 p.m.

The reason for the ship’s arrest is unknown.

Kemp had been a sheriff for approximately 20 years before his tragic death, SAMSA said.

The cause of death is under investigation by SAMSA and the South African Police Service.

This news is a total 835 time has been read
Tags: Deputy Sheriff Dies Serving Arrest Warrant to Ship Off South Africa