Derince Port tender to be held 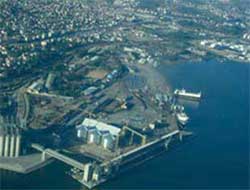 Turkish privatization Administration (ÖİB) is satisfied with the notable interest the tender for the management rights of Derince Port, North of İzmit Gulf, has attracted.

Derince Port tender to be held on August 20

Turkish privatization Administration (ÖİB) is satisfied with the notable interest the tender for the management rights of Derince Port, North of İzmit Gulf, has attracted. Until now, investors including Akfen and Hutchinson, which have been previously involved in several port tenders, have applied to manage the port for the next 36 years.

The tender, which will be held on August 20, is expected to have a high participation rate. companies providing logistical support for the automotive sector have been said to show strong interest in the tender because of the port's strategic location. Derince Port, with its connection to the railway, will gain more strategic importance after the privatization of Haydarpaşa Central Train Station in Istanbul, authorities emphasized. The port, which is close to three export cities, is the backyard of the automotive sector and its supplier industry.

Investors that will participate in the tender have been divided into three groups: investors managing ports in Turkey, global players of the port sector and companies providing logistical support for the automotive sector. Akfen, Hutchinson, Arkas Holding and Dubaiport have been said to be among the companies interested in the tender for Derince Port, expected to be complete in September.

The tender for the construction of a new sports complex by Housing Development Administration of Turkey (TOKİ) in Istanbul's Seyrantepe in the site of Ali Sami Yen Stadium in Mecidiyeköy district has been cancelled, Anatolia news agency reported.

TOKİ cancelled the tender on the basis that competition atmosphere that would enable the tender conditions was absent, said a statement released by TOKİ on Wednesday. TOKİ will hold another tender before August 10 in order to increase participation rates and proceeds in a healthier atmosphere.

Tender for the construction of the sport complex was first announced on July 19. Some 28 companies obtained specifications while five companies bid for the tender. The construction included a multipurpose stadium with a capacity for 52,000 people and a parking lot for 4,500 vehicles. Once complete the complex will be transferred to the General Directorate of Youth and Sports.

This news is a total 1474 time has been read