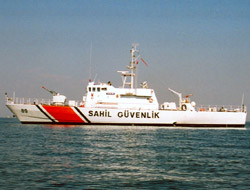 Turkish Coastguard have detained 274 illegal migrants on boats in the Aegean Sea in the last three days, the coastguard said on yesterday.

Turkish Coastguard have detained 274 illegal migrants on boats in the Aegean Sea in the last three days, the coastguard said on yesterday.

The migrants came from Africa, Iraq, Pakistan, Afghanistan and the Palestinian territories, a statement from the coastguard said. No further information was immediately available.

The Turkish coastguard has detained more than 1,800 illegal migrants since the start of this year.

Thousands of people from around the world try to cross from Turkey into European Union-member Greece in the hope of traveling on to central or western Europe each year.

The operation, codenamed Poseidon 2007, was conducted on the frontiers of Greece and Turkey, Greece and Albania and Bulgaria and Turkey as well as the Aegean Sea between mid-May and the start of June, it said.

Most of the clandestine immigrants were from Afghanistan, Somalia, Iraq and Albania, the Warsaw-based organization said in a statement.

It said the Poseidon 2007 was "a response to the influx of illegal immigrants using the Balkans and maritime routes from North Africa," it said.

This news is a total 1775 time has been read