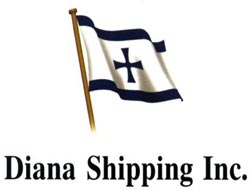 Diana Shipping Inc. announced that it has executed an agreement with a related party to acquire a single purpose company, Gala Properties Inc.

Diana Shipping Inc. announced that it has executed an agreement with a related party to acquire a single purpose company, Gala Properties Inc.

Diana Shipping Inc., a global shipping company specializing in the transportation of dry bulk cargoes (``Diana''), yesterday announced that it has executed an agreement with a related party to acquire a single purpose company, Gala Properties Inc., that has a contract with China Shipbuilding Trading Company, Limited and Shanghai Jiangnan-Changxing Shipbuilding Co., Ltd for the construction of a 177,000 dwt Capesize dry bulk carrier, identified as Hull No. H1138, with a contract price of $60.2 million. The seller is a company controlled by the two daughters of Diana's Chairman and Chief Executive Officer, Mr. Simeon Palios.

As a result of the transactions described herein, Diana expects to acquire the owner of a newbuilding Capesize dry bulk carrier with an attractive time charter, in exchange for Diana's interest in a vessel with identical specifications and contract price. The incremental cost to Diana (excluding legal and other expenses associated with the transactions) will be approximately $15 million paid to the sellers.

Gala Properties Inc. has time chartered Hull No. H1138 to Jiangsu Shagang Group Co. (``Shagang'') or its nominee (with performance guaranteed by Shagang), at a gross charter hire rate of $55,000 per day for a period of a minimum of fifty-nine (59) months and a maximum of sixty-two (62) months, commencing upon delivery of the vessel from the shipbuilders. This employment is anticipated to generate approximately $97 million of gross revenues for the minimum scheduled period of the charter. Diana expects this vessel to be delivered to it, and the charter to commence, in November 2009.

In exchange for this acquisition, Diana will transfer to the seller its ownership interest in Eniwetok Shipping Company Inc. (``Eniwetok''), a wholly owned subsidiary of Diana. Eniwetok previously contracted with the same shipbuilders for the construction of a separate 177,000 dwt Capesize dry bulk carrier, identified as Hull No. H1108, for the contract price of $60.2 million, with a scheduled delivery date of June 30, 2010.

The closing of these transactions is subject to the completion of certain transactions by and among the parties to the shipbuilding contracts and necessary financing arrangements. Diana expects the closing to take place in May 2009.

The President of Diana Shipping Inc., Anastassis Margaronis, commented: "We are very proud to announce this transaction. After extensive negotiations, as a result of these transactions, we expect to own an entity with a Capesize vessel time chartered to a first class charterer at an attractive daily charter hire rate arranged back in June 2008. We believe this latest transaction should further improve the visibility of the Company's cash flow over the next five (5) years and reflects our determination to execute profitable deals during these challenging times while maintaining our strong balance sheet. We have also obtained an assurance by the shipbuilders that they will use their best efforts to deliver to us another sister ship that we have previously contracted to acquire, Hull No. H1107, by March 2010, well in advance of its original scheduled delivery date of April 30, 2010. As we have previously announced, that vessel is already time chartered to Nippon Yusen Kaisha for $48,000 per day for minimum fifty-eight (58) to maximum sixty-two (62) month period, commencing upon its delivery to us from the shipbuilders."

This news is a total 1659 time has been read