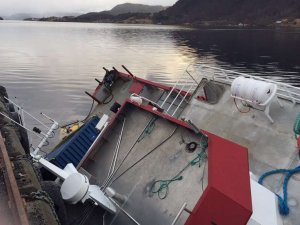 The accident happened during the evening, when on board of the vessel there were no crew, and was reported to the local police in the early morning. The area around the troubled catamaran was surrounded by oil booms, which restricted the spreading of oil spot to the shore. Later during the day the diesel leak increased and the local fire department laid more oil booms to prevent impact to the local environment. There is no information about exact quantity of spilled oil. The water cleansing operation were started and authorities will assess the impact of the oil spill to the environment.

The vessel had no crew on board, as all the seamen left the vessel during the evening, when the accident happened. The right hull breached and started getting water ingress, which caused partial sinking of the catamaran. The accident was reported to the local police station at the morning, but during the day the seaworthiness of the vessel worsen and ship completely sank, remaining only with mast above the water level.

The refloating of the fish farm catamaran Fosnakallen will be considered during the next days, but just after eliminating of the oil leak and pumping out the whole quantity of diesel from the fuel tanks of the catamaran. There were no reported injuries during the accident.

This news is a total 1143 time has been read
Tags: Diesel oil spilled in Norway after fish farm catamaran Fosnakallen sank